Main - DRIVERS - Rules of the Track

Flags convey the commands or information indicated below. They must be obeyed immediately and without question. The content of this section cannot be changed or amended by the event Supplemental Regulations.

1. Minimal Flag Sets
It is possible that some events will only use the Yellow, Black and Checkered flags, and the Blue Flag if passing is allowed.

2. Lights instead of Flags
Some tracks and events may use lights in the place of flags. Check the event's Supplemental Regulations for where on the course and for what purpose lights, if any, will be used.

Time Trials are not wheel-to-wheel competition. All passing—no matter the procedure—should be done with care, and with the least amount of disruption to each competitor’s lap, session or event.

1. Passing Zone
A passing zone is a designated area on track where passing is allowed to take place. Whenever possible, passing zones should be marked with cones or signs.

2. Passing Signals
A passing signal or “point-by” is a signal given by a leading car, giving permission to a following car to overtake. As a general rule, a point-by should be given by the driver being passed by extending an arm out of the driver’s window and indicating which direction the passing driver should go. Once a driver has given a point-by, he/she should make sure the passing driver has adequate space and speed differential to complete the pass safely (e.g., by slowing down enough to let the passing driver by).

A. Drivers of vehicles with window nets or other driver-window obstructions may point-by from inside the car. Other drivers shall be notified of any driver using an inside-the-car point-by, and the rear window of inside-point-by cars should be marked with a bright color tape contrasting as much as possible with the color of the car to let other drivers know where to look.

B. For drivers with physical conditions which render the use of a hand signal inappropriate, these drivers may use turn signals with the approval of the Event Lead. Other drivers shall be notified of any driver using a turn signal for point-by and the turn signals of that car shall be marked with a bright color tape contrasting as much as possible with the color of the car. 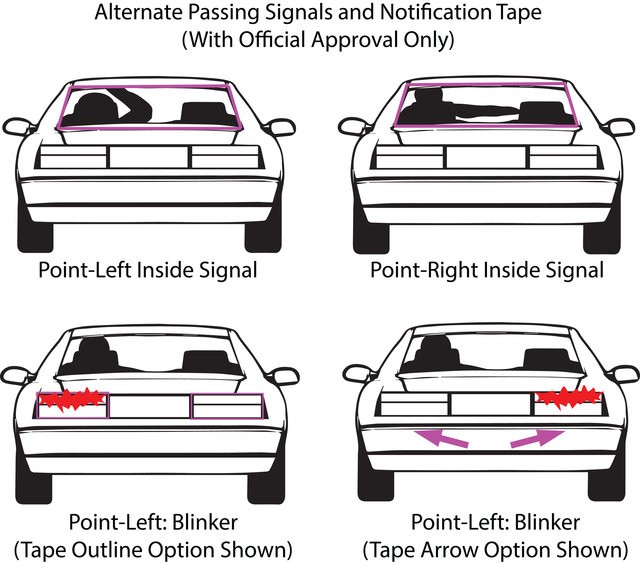 A. Advanced Level drivers: It is suggested that the most experienced Time Trials drivers are able to pass anywhere on track, with passes in corners accomplished with a point-by. Passes on straights may be done without a point-by.

B. Intermediate Level drivers: It is suggested that Time Trials drivers with intermediate levels of experience may pass anywhere on track, but that passes are always with a point-by.

C. Beginner or Novice Level drivers: It is suggested that Time Trials drivers with the least amount of experience be limited to passing on the longest straights only, and passes are always with a point-by.

3. Entering and Exiting the Track

A. Obey signals from any pit-out worker.

B. Keep an eye on mirrors as you enter the track, looking for any traffic the worker might have missed.

C. Do not cross the "Blend Line" – a line on the track which acts as an "invisible wall" allowing the driver to look for traffic without crossing into the driving line.

2. Exiting the Track
Whenever a driver exits the track into the pits, drivers should always:

A. Plan early: Last minute "dives" onto pit road can be dangerous for you and other drivers on course.

B. Display a "pit-in signal." Whenever possible, drivers should give a pit-in signal to notify other drivers they will be coming into the pits. The pit-in signal is made by raising an arm out the window and holding up a fist. Pit-in signals should be given with enough time to allow other drivers to react to potentially greater closing speeds. 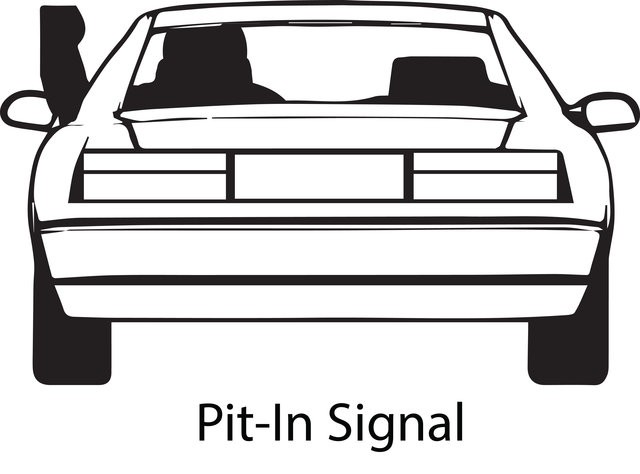 1. Scored Sessions
No passengers are permitted during any scored session or run during an SCCA Time Trials event

2. Unscored Sessions
Passengers may be permitted during and unscored session during a Time Trials Event, with the approval of the Event Lead or designated event official.

1. If for any reason a driver is forced to stop his/her car on the course during an event, it should be his/her first duty to place his/her car in such a manner as to cause no danger or obstruction to other competitors.

6. Rules of the Grid

7. Rules of the Paddock

The paddock is defined as the area reserved for the parking of or working on participating automobiles. At Time Trials events, these areas should be defined as “cold” areas, and as such, be open to spectators (if applicable), unless otherwise restricted in the Supplemental Regulations for an event.

1. Cars shall not be run in gear with the drive wheels off the ground.

2. Jack stands must be used whenever any person is under any part of a lifted vehicle.

3. All vehicles must be securely held in place via chock, stand, or other positive method whenever the driver is not seated in the driver’s seat.

4. Any compressed gas cylinders with pressures above 200 psi must have a cage or similar device to protect the valve/regulator/gauge assembly when rigged for use.

5. Any pets must be securely fastened to a leash and securely held by a stationary object or by an adult at all times.

6. All minors shall be under adult supervision at all times.

7. No person may ride on the external bodywork of any vehicle in the pit/paddock.

8. Commercial and private unmanned aircraft systems (aka "drones") are prohibited unless authorized in the Supplementary Regulations.